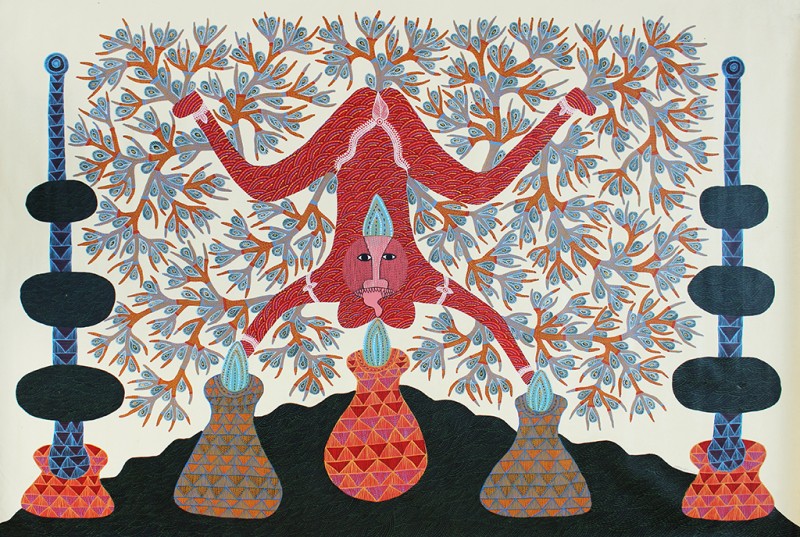 Born in 1970 in Madhya Pradesh

Ram Singh Urveti is, along with Jangarh Singh Shyam, one of the historical figures in contemporary Indian tribal art. Encouraged by Jagdish Swaminathan, he was one of the first to go from ephemeral art to painting on canvas at the beginning of the 80s. Important wall paintings by Ram Singh Urveti are kept by the Museum of Man in Bhopal. His paintings celebrate the spirits of his tribe, the Gond. The subjects painted are informal. Evanescent in nature, they belong to the spirit world. Buffalos, totems, men, shamans, offering jars, snakes and intertwining trees are transformed and mutate into improbable silhouettes, those in dreams and folktales. The absence of any contour to outline the shapes, except for the eyes, strengthens this effect. Ram Singh Urveti’s drawings possess the enigmatic force that can be found in Art Brut. This makes us think of one of the great names in Outsider Art, the Scotsman Scottie Wilson. The inextricable and organized entanglement of the black ink strokes also recalls another entanglement, this one made of wax ribbons, characteristic of the bronze sculptures made by the Gond, who are also great sculptors.

As with many tribal artists, the tree is omnipresent in his paintings. Ram Singh Urveti focuses his interest on the tree’s trunk in order to evoke serene power. The trunk is a concentration of energy and, like the mountain, seems indestructible. In this way, the spirits often take on the squat shape of that part of the tree. They take up space on the canvas in an imposing manner, structuring and organizing it. The patterns and their placement within the space have the simplicity and graphic efficiency of flags. These spontaneous elevations, similar to the ling growing on termite mounds, to erect stones or, more precisely, to a tree trunk, give his canvasses the heraldic look of animistic flags. The visual forthrightness, reinforced by the rounded shapes, also evokes another artistic movement, graffiti. All the poetic ingenuity of the popular arts from one tribe, the one on the streets of New York, to another, the one in the forests of Madhya Pradesh, can be rediscovered here.

Ram Singh Urveti has taken part in many exhibitions in India and overseas:
The exhibition Freedom, for the sixtieth anniversary of the Independence of India, alongside the greatest names in modern and contemporary Indian art (CIMA, Centre of International Modern Art, Calcutta, 2008).
In August 2009, in the exhibition Now that the trees have spoken organized by the contemporary art critic Ranjit Hoskote, where he was invited by the famous Pundole Art Gallery of Mumbai.
In 2010, in the exhibition Non metropolitan, Five Contemporary Artists from India held in the Rob Dean Art Gallery in Pasadena, California. On that occasion, the New York Times saluted the return of the great names in tribal art.
In “Art Contemporain Indien” par Hervé Perdriolle, 5 Continents Edition Milan 2012 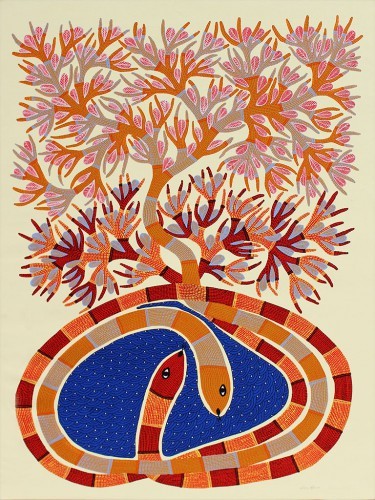